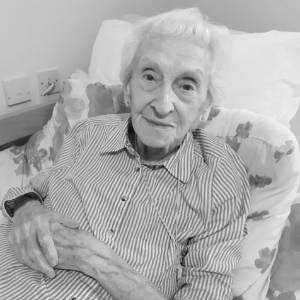 We didn't know what war was, but we knew it was no good


Originally from Ardgay, Mary Manson moved to Wick with her family in 1935. After leaving school she worked in the Wick bus office before moving with her husband to live in Thurso in 1960. At the time of this recording she was a resident of Bayview House care home in Thurso.

"It was a culture shock to me going to a great big school," Mary says as she describes her first impressions of Pulteneytown Academy (now the Assembly Rooms). One of her most vivid memories from that time is the fear she felt on seeing a jar with a snake inside it. Mary was sure it was alive, and she had been warned about the dangers of encountering poisonous adders. The headmaster was able to assure her that the snake was dead and therefore nothing to worry about.

Mary also remembers the death of King George V and the outbreak of war a few years later. She recounts the time she took cover in Northcote Street during an air raid. Mary also talks about the Bank Row bombing and the impact it had on her father, who was involved in pulling out one of the victims.

A happier memory of wartime is a Victory in Europe dance at RAF Skitten with music from a Canadian big band. Mary remembers enjoying tunes such as American Patrol and In the Mood.

Mary has been a keen knitter from the age of 11 and knitted for the forces during the war. Now aged 94, she continues to produce woollen garments for underprivileged children in eastern Europe as part of an annual Christmas appeal.

Mary shares her recollections of Operation Snowdrop in 1955 when she was in the Henderson Memorial Nursing Home… a story that involves references to cauliflower au gratin and a helicopter.

She also talks fondly about her involvement in the Caithness Music Festival, where she won trophies for dialect recitations.