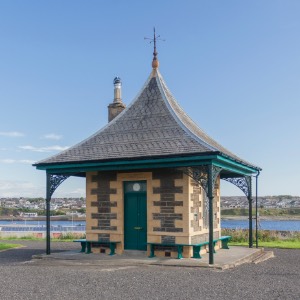 The Pilot House - it is a great little building


Peter Sutherland recalls how, as a youngster, he helped his father, local historian Iain Sutherland on various projects throughout the county of Caithness.

"We were railroaded into it, we didn't volunteer.”

He recalls helping his father to "move stones” at various locations. Giving a hand for 10 minutes often resulted in eight hours of hard work.

Peter talks about his father's passion for preservation and restoration. He also mentions his involvement in the Whaligoe Steps, Mary Ann's cottage at Dunnet and the Cairndhuna well. Iain was passionate about the Wick Heritage Centre as well as the Pilot House overlooking Wick harbour and the bay.

Peter talks about the history of the Pilot House, which was donated to the town by Sir Arthur Bignold in 1908 and was in use until 1953. He explains how his father then became involved in the restoration of the building in 1974.

Despite its limited seating capacity, it has been used as a meeting place for locals and tourists alike. Peter aims to reopen the Pilot House for teas, coffees and a blether once pandemic restrictions allow.