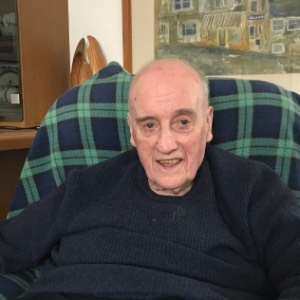 Meeting the Archbishop of Canterbury


Alistair Sutherland was born in Wick and lived in Ash Villa, George Street. During the early years of the Second World War, Alistair had to sleep in a camp bed in his parents' bedroom as rooms within the house were allocated to RAF personnel. He recalls, "From my camp bed, I could see planes coming back in the morning when they'd been out on a raid. I could see them from the window and this particular plane was coming down and he was so near that I could see the pilot just staring at me and lo and behold they crashed in Willie Ronaldson's field.”

Bombs falling in the town of Wick prompted his parents to send him out to the family home at Summerbank, Auckengill. There he attended the local primary school.

Alistair explains that the house at Auckengill had previously been called Halfway House and was also referred to as the University of Nybster when his grandfather, John Nicolson, sculptor, painter, archaeologist and historian lived there.

After the war, Alistair and his family moved to Orkney where his father took up the position of Ministry of Agriculture Vet based in Kirkwall. Alistair spent a great deal of time in St Magnus Cathedral where he assisted the custodian Albert Thomson and learned a great deal about the history and architecture of the cathedral. Although Alistair studied at Edinburgh School of Art, he continued to assist at the cathedral out of term time. On one occasion he was asked to accompany a large group on a conducted tour. One distinguished gentleman, who introduced himself simply as Geoffrey, engaged Alistair in conversation. Some months later Alistair was astounded when viewing the Coronation of Queen Elizabeth. The Archbishop of Canterbury, Geoffrey Fisher placed the crown upon the head of the Queen. It was at this point that Alistair realised this was the distinguished gentleman he had conversed with in St Magnus Cathedral

Alistair recalls the occasion when he assisted at a wedding only to discover that the necessary paperwork from the Registrar was missing.

He also talks about the occasion when a music teacher he recognised from his time at Wick High School visited the cathedral and asked to play the church organ.