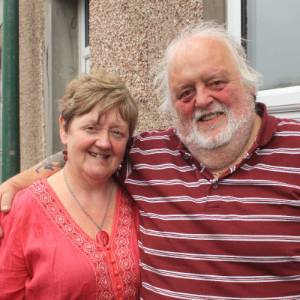 A German bullet or a German uniform


Ray Szyfelbain shares some memories of his Polish-born father, the late Oskar Schiefelbein - better known as Steve Szyfelbain after he settled in Wick and married Violet.

"He never became a solider. Photographs we saw in 1975 showed him as the equivalent of a military policeman.

"Father eventually, along with a lot of Polish colleagues, ended up in France. Knowing that Hitler was on his way out, they decided 'we've had enough'. They ran through a minefield, survived, and were captured by the British soldiers."

Oskar was later sent to the Dounreay RAF camp. He worked on farms and as a blacksmith.

Oskar was a gifted craftsman and had tailoring and cooking skills too, as well as being a fine dancer.

Ray's wife Jenny also takes part in the recording and she talks affectionately about Oskar, a.k.a. Steve.

During the interview Jenny points out similarities between some German words and Caithness dialect.