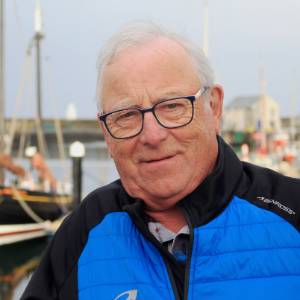 
"The week or fortnight before back to school, I was more or less fitting kids' shoes from nine o'clock in the morning until five o'clock at night," says Stewart Gunn as he reflects on how Gunn's shoe shops were thriving focal points in the town centres of Wick and Thurso for many years. "Eventually it was getting to the stage where the mothers were coming in and I had fitted the mothers to go to school!"

The onset of wintry weather was another important time of year in the shoe retailing trade: "When you got the first snow of the winter the place would just be awash with people coming in for welly boots or winter boots."

Stewart also talks about growing up in Wick where his parents ran a restaurant, confectionery and B&B in High Street.

The family moved to Thurso and Stewart went on to complete an apprenticeship at Dounreay. He worked as an electrician for a year before going into the family business full-time.

Stewart explains how his grandparents had a licensed grocer shop in Bank Row, and how his enterprising grandfather found a way to adapt during the period when Wick went "dry".

His granny ran the Nethercliffe Hotel and Stewart remembers how he and his brothers learned to ride their bikes by going round a circuit inside the premises.

Stewart explains how in retirement he became a volunteer driver with Caithness Rural Transport, as well as playing golf and taking on the role of vice-chairman of Wick Academy Football Club.