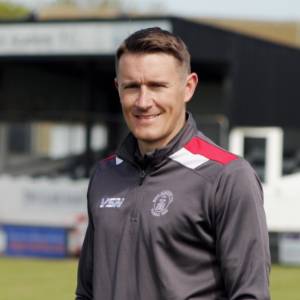 Every single day of the week is taken up by football


Gary Manson made his Highland League debut for Wick Academy FC as a 16-year-old in August 2000. Twenty-two years later he is still at the club, now as player/manager, and is a respected figure throughout north football and beyond.

In this interview, Gary reminisces about playing football as a four-year-old in Thurso before going to Pennyland Primary School. He was part of Aberdeen's regional youth football squad in the far north before going on to Ross County at the age of 14.

Gary reflects on some of the highlights of his Wick career, including the 2012/13 campaign when the team won all 17 of their home league games (an achievement that was "unheard of") and came close to winning the league title; the North of Scotland Cup victory in 2015, the first time Academy had won silverware since becoming a Highland League club; and several memorable Scottish Cup ties. "My whole adult life now has been training twice a week, playing on a Saturday," he says.

Gary also talks about some of the team-mates he has played alongside over the years, and previous Wick managers.

He gives an insight into the travelling demands faced by Academy players as they have to make long bus journeys to away games every second week during the season.

"When I started there were no smartphones, there were no iPads, there was nothing like that, so it has completely changed how you spend your time on a long bus journey now," he explains. "When I first started, you would have to buy about three newspapers and read them all, cover to cover. You would go down and play a game of cards, but back then we never had any tables on the buses. If it was a really long journey and we were really bored we would have a game of bingo."

Gary, who works as an assistant project manager at Dounreay, tells of the time and commitment involved in being a Highland League manager and makes it clear that his motivation is as strong as ever ahead of the 2022/23 season.

He says: "It's a job that you could never ever do yourself, so having Michael Gray [assistant manager], Gordon McDonald [first-team coach] and James More [goalkeeping coach] there is a big help. Even with those guys there, I feel like it's almost a full-time job at times… Every single day of the week is taken up by football. It is almost 24/7. It is very full-on.

"As a player you're part of a team, you're just one cog in that wheel. But as a manager you're overseeing everything, you're responsible for the whole squad, and I think to win something as a manager would eclipse that 2015 cup win for me.

"If a psychologist looked at me I'd probably be declared insane, but it's just that competitive nature and I have that desire to go and win more trophies than I have at the moment."