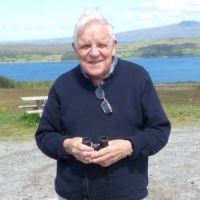 
Local historian, Harry Gray talks about, "The herring gutting and packing trade that was responsible for the wealth of a few and employment for many."

The ruling body for the industry was the British Herring Trades Association and they set the price for a barrel of cured herring and the workers' wages so that no one could cut prices. Incredibly all the records of this association have vanished. They have been either lost or destroyed.

Harry explains how the women signed up to a curer at the beginning of a season. Each crew consisted of two gutters and one packer.

He talks about low wages, industrial action and the lack of consideration for health and safety. The women wrapped "clooties" around their fingers to give some protection from salt seeping into the cuts, caused by sharp knives. The speed at which the fish were gutted and sorted is also discussed as well as the kippering process.

The Wick season ran from June until September, then in early October the girls travelled by train to Yarmouth or Lowestoft to work a season there. Harry explains, "The last Herring Queen was Christine Gunn in 1953 and suddenly it was all over and nearly 175 years of the herring industry came to an end. The last Wick boat to travel to the Herring fishing in Yarmouth was Skipper Jimmy Bremner's Fisher Boy in 1953."

He also recalls that he had the chance to go to the herring in a small local boat with two nets, and came home with a bucket full of fresh herring, He was just about to gut the fish when his mother appeared on the scene, looked and said, "What's this you're doing?" Harry explained to her, knife in hand that he was about to gut the herring. She shook her head and said, "Ye'll hardly need a knife for back end herring, come oot o' ma rod." She sat down and using her fingers, gutted the bucket of herring in a twinkling and that was the last time that he had the privilege of watching an expert gutter in full flow.