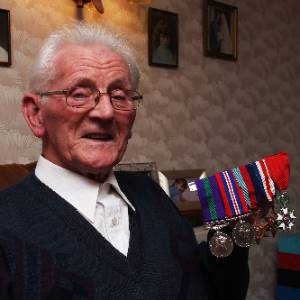 I always thought that I was one of the very, very, very lucky ones


Robbie Larnach from Lybster was still a few weeks away from his 20th birthday when he plunged into the deadly confusion of D-Day. As a Driver/Mechanic in the Royal Artillery, he was in charge of a four-wheel vehicle towing a 25lb gun as it emerged from a barge and made its way ashore onto Sword beach. The main objective after that was to capture the town of Caen.

Although this interview was recorded more than 74 years after the Normandy landings of June 1944, it is clear Robbie still has painful memories of that momentous episode in World War II.

He goes on to explain how in September 2017 he returned to Normandy for the first time since the war. He went back again in April 2018 and hopes to pay further visits.

A prolific goalscorer for Lybster FC, Robbie was not the only member of the family with a talent for football: at one point the village team had no fewer than seven Larnach brothers in its ranks. He was dedicated as well as skilful. One day, after finishing work at Wick aerodrome, he ran all the way from Wick to Lybster in time for an evening match and still managed to play a full 90 minutes.

Robbie reminisces about one of his most memorable goals, and tells how Hibs were keen to give him a trial. He also played for Wick Academy and Wick Groats, and in November 2018 Robbie was pleased to be invited to play a part in Groats’ 125th anniversary celebrations.

The picture shows Robbie displaying his medals, including the Légion d'Honneur on the right.