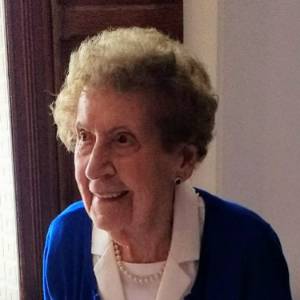 
Alice Ross was born in 1918 at Achastle where her father, John Ross, had a croft. In this short recording, Alice talks about walking to school every day in Lybster and recalls how once a year she travelled on the Wick and Lybster Light Railway. In 1945 she married Charles Ross, from Forse, who had served with the Scots Guards in Africa during World War Two. The wedding took place at the Portland Arms. After a spell living in Strathpeffer the couple returned to Lybster and ran C & A Ross, a grocery, confectionery and hardware shop just along from the hotel.

From an early age Alice showed great skill in tapestry, sewing and quilting. A long-serving member of the SWRI, she received honorary membership of the Latheron Institute in 2007.

The recording was made in July 2018, a few days before Alice’s 100th birthday.

Alice passed away in December 2018.