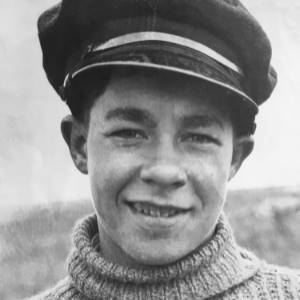 We were the diehards, the ones that stuck it out


John Manson was a member of the last family to leave Stroma in 1962. “It was sad to witness the whole thing, and we did witness it,” he says as reflects on how the island population gradually fell away to nothing. Stroma had been inhabited for 5000 years until the Mansons left, he points out. “It was the end of an era.”

John’s experiences while growing up included beachcombing, making little sailing ships and learning how to box a compass. He recalls how the harbour was the hub of the island.

As a youngster he had the task of going around all the islanders to notify them of the times of funerals. For this task he would be paid the “princely sum” of 2/6.

He talks about the “vicious” tides around Stroma and gives details of shipwrecks and rescues over the years. On one occasion he had an emotional reunion with a member of a Faroese fishing crew he had helped to rescue 40 years earlier, when they were both just 16.

John remembers the smell of diesel wafting across the sea from the George Robb trawler disaster at Duncansby Head: a “pure tragedy”. From long before his own time, there was the story of how the writer Henry Rider Haggard was rescued after the ship on which he was sailing ran ashore on Langaton Point.

“One night we were at Dunnet Head and the fog came down and it got dark before we got home,” he says. “We had to go into Harrow harbour – we couldn’t see to get home, there was no radar. My mother, she was stuck on Stroma not knowing if we were living, dead, drowned, whatever. It was her I felt sorry for… We never came home that night. She must have sat in the house wondering where we were.”

John explains how Stroma lobsters were sent to London via Huna and Wick, and recalls the “floating shops” that came over from Orkney.

After leaving Stroma he settled in Scrabster and still lives there, in a house called “Stroma”. He has taken part in two TV programmes about the island.

John has spent most of his life as a fisherman and now, in his mid-seventies, his connection with the sea continues as he works part-time at the Scrabster fish mart.

He spent 23 years as a member of the Thurso lifeboat crew and had some “rough old nights” in that role.

John explains how the Stroma Gathering was a popular social event for many years as exiled islanders gathered to renew old friendships and share memories.