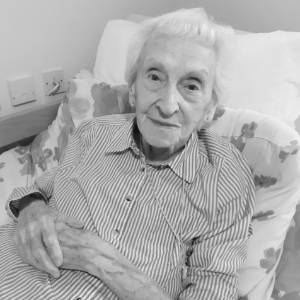 Baikie Webster, the Howdie, and illicit alcohol on the bus to Wick


Originally from Ardgay, Mary Manson moved to Wick with her family in 1935. After leaving school she worked in the Wick bus office before moving with her husband to live in Thurso in 1960. At the time of this recording she was a resident of Bayview House care home in Thurso.

In this recording, Mary tells of Baikie Webster - a black-clad woman whose job it was to attend to the newly deceased at a time when bodies were kept at home until the funeral. She also talks about the Howdie, who assisted women in childbirth.

Mary then looks back to Wick's prohibition era and the clandestine movement of alcohol from Thurso when bottles were carefully concealed at the back of a bus before being collected by a Mrs Stewart with her pram. On one occasion, as Mary recalls, the Wick-bound illicit booze had to be hidden in a ditch outside Watten to evade a police search.

There are two other interviews by Mary Manson in the Wick Voices collection, recorded at the same time as this one.