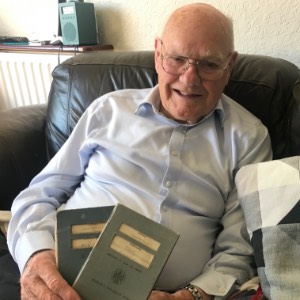 I am an old sea dog


John Campbell claims, "I'm an old sea dog having been at sea since 1953 until I retired.”

Having just left the wilds of Caithness to join his first ship at Albert Dock, London, John describes the terrifying experience when, on his second day aboard as a young apprentice, he was asked by the captain to accompany six members of the Indian crew to attend the Dreadnought Hospital, near Tower Bridge.

John describes his sense of panic on the return journey to the ship, "Before we got to the bus, I looked round and the Indians had vanished, every one of them had gone.”

He was terrified to report to the captain that he had lost six members of the crew.

He describes his surprise and sense of relief when sometime later he spotted the six crew members making their way along the quayside, "They were carrying sewing machines on their heads, they had bought Singer sewing machines. Every one of them had bought a treadle sewing machine to take back to India.”

John's first ship as Chief Officer was aboard the Caltex Dublin sailing from Bombay to Calcutta. Entering the harbour at Cochin they witnessed fishermen hauling in nets of prawns. The captain declared, "Prawn curry for supper tonight.”

Despite the delicious smell, John declined to partake of the curry as he had a previous experience of illness due to eating shellfish.

Prior to going on watch at 0400, John was approached by the second mate to say the captain was ill. It appeared that everyone who had eaten prawn curry was now suffering from food poisoning, so John was left to attend to the sick and ensure the safety of the ship.

When John was appointed Chief Officer to the Texaco Kenya in dry dock in Singapore, he received a message to say that they had to change crew with the neighbouring ship the Texaco London. John not only describes the challenges involved in changing crews, but he talks about how they overcame the problem of having 'large mice' onboard.

Further stories are told throughout this interview, including a memorable trip ashore in Buenos Aires.