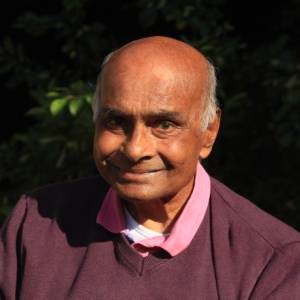 I love Wickers, they made us so welcome


Pradip Datta had no idea where the Bignold Hospital was when he applied for a job there in 1980. But he came to Wick, settled down, and lived there for the rest of his life – a highly respected figure in Caithness and far beyond through his work as a consultant surgeon.

Born in the Indian city of Calcutta (now Kolkata), Pradip was keen from an early age to enter the medical profession. His mother told him that his first words were "I want to be a doctor" (although he acknowledges that "maybe parents make a bit of an exaggeration").

Pradip attended a Roman Catholic school before beginning his training. He arrived in the UK in 1967 with (as he mentions in this recording) £1 and 10 shillings in his pocket.

He had spells in various parts of the UK and then spent 25 years working in Caithness, at the Bignold and then Caithness General Hospital, before retiring. He speaks passionately about his admiration for the NHS, "the greatest service given to this country".

He and his late wife Swati were made to feel very welcome in the Wick community. Pradip was pleased that his mother lived with them in the town for a number of years. He explains how his son Sandip – a child psychiatrist – is able to speak fluent Bengali and also fluent Caithness.

In 2020, Pradip published his memoirs and in the recording he explains the reason for the book's title: The Naked Mountain Lands. The book is a detailed and often humorous account of his life in the 50 years after he left India.

It is on sale at Meiklejohn's shop in Wick and from the Hearing and Sight Care office in the town. So far £5000 has been raised for his three chosen charities through sales of The Naked Mountain Lands. An audio version has been recorded by Scottish actor Finlay McLean

Pradip was a multiple champion on the local squash scene and is Wick Squash Club's only lifetime member. In the summer of 2021, court one at the club was named in his honour. In recognition of his friendly rivalry with local player Roy Mackenzie, Pradip presented an engraved glass trophy to be called the Mackenzie Rose Bowl which will be competed for annually.

Pradip was also a keen angler, taking his son around Scotland and beyond in pursuit of fish.

Having suffered a stroke, Pradip was supported at his home in Wick by his friend Loretta Reynolds and by carers. He had become, as he says in the interview, a beneficiary of the system created by Aneurin Bevan.

Pradip says: "I am very, very, very lucky to be in Wick and very grateful to the Lord for sending me up here."